July arrived and so did the sun, rain and wind, but no weather could deter from the enthusiasm and talent of the children I had the delight of sharing the Dyslexia worksop with.

As the children stepped through the door of The Barefoot Sanctuary into the workshop the energy rose up and excitement and nerves all started to bubble to the surface for the children and for myself.

The workshop was designed to explore what Dyslexia meant to each individual child and to look at the positives in being identified as Dyslexic.

Each day we started off with a high energy game, followed with a check in and then onto the art making process. The workshop closed with another high energy game, a check out, where one positive was shared from each child on how their Dyslexia had helped them that day and then a game of wink murder. The structure was to allow containment for the children’s feelings and for them to feel safe to explore and express their emotions in relation to their Dyslexia. 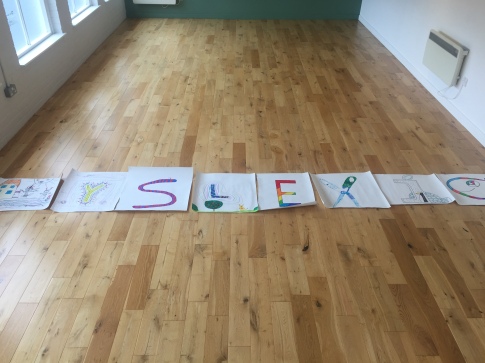 Dyslexia was our main focus, so where better to start then the word itself, identifying that it is just a word and it does not need to define us. Each child chose a letter and designed it how they wanted it to look, with the idea it could be anything they wished.  As pens moved across the paper voices started to become louder and stories were being shared about how each child had come to be in the group. United by their Dyslexia voices that were once quite became louder, offering stories, suggestions and ideas of how they wished to use their time in the workshops.

As I sat and witnessed the children work with their strengths, I was in awe of their ability to share their truth about their Dyslexia openly and honestly in the group. As they drew they discussed what was hard about being Dyslexic, the challenges they face in school, at home with siblings, with friends and parents. Amongst all the challenges there was clear strength and perseverance presence in the room as they continued to share ways of learning that worked for them and find the positives in being identified as being Dyslexic.

The children worked together to design new games, utilising problem solving skills and creative out of the box thinking to ensure everyone could take part. They worked together demonstrating listening skills, great communication, respect for one another as they created and drew ideas and designs for the last day expressing how they wished to bring everyone in the group together.

In one closing circle the questions was “what is the positive in having Dyslexia?” the child stated

Parents noted in response to the question ‘Do you feel working in a small group of children also identified at Dyslexic supported your child with their understanding of her own Dyslexia?

“Yes, she is proud of herself. She sees her abilities differently now and looks to problem solving rather than despondency. “

“We all really think it helped him to understand Dyslexia more and he enjoyed talking about it with other’s as its not something he would necessarily talk about with his friends.”

I feel the children grew in confidence and their understanding of their Dyslexia. Through the art making process they were able to come together and share their narratives of their Dyslexia and to be heard, witnessed and understood by one other.

Dyslexia is amazing and I hope through further workshops I can continue to share this with children and help them to feel empowered by their Dyslexia.